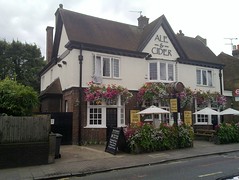 The interior is traditional rather than gastro, and the walls are covered with pump clips. There's also a beer garden.

The quality was good, and I was offered a choice of a straight glass or a mug. The member of bar staff I talked to said they normally get through an ale in two days, and if it doesn't sell within two days they lower the price to make sure it sells out before it's past its best.

They have a loyalty card system: if you buy nine pints you get your tenth free.

According to their website as of September 2012, food is served noon-3pm and 6pm-9pm Mon-Fri; and noon-7pm Sat-Sun. Also, there's live music every other Monday and every Tuesday, free wireless, and a book exchange scheme (bring one and leave one).

bob's verdict: I was sorry I had to leave so early, and would definitely go back again. It's the best pub I've been to in Twickenham, and possibly one of my London-wide top ten.