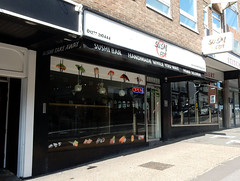 They also do takeaway and delivery, with online ordering via Just Eat.

Inside, there's seating for about 20 or so people at black-and-white melamine-topped tables with black pleather padded seats, plus a handful of wicker-style bar stools at a counter looking out onto the street.

The sushi is prepared behind a large bar at the side of the room, though this isn't the traditional type of sushi bar where one can sit and talk to the chef; there are only two stools at it, positioned away from the chef near the door. A large spraypainted portrait of a woman in black, white, and red covers the entire opposite wall.

Kake visited on a Friday early evening in September 2015. Arriving just after their opening time of 5pm, I was the first customer. Music was playing, not too loud, electronic and lively, including a techno version of Terence Trent D'Arby's "Sign Your Name".

I started with wakame salad (£4) photo. It was a generous portion, also containing nori and agar, and topped with a tangle of daikon and a sprinkling of black and white sesame seeds. There was a hint of spice, which built nicely as I ate it.

The fish was fresh, though some of the cuts were a little ragged. The rice was competently handled, with the grains neither starchy nor mushy, and with a subtle level of seasoning (I prefer it more aggressive, but that's just personal preference). The pieces of nigiri and maki were rather large, though not too large to eat comfortably.

Service was efficient and friendly. No service charge was added to the bill.

Accessibility: A large step to get in. Three steps with no handrail to the toilet (a single unisex cubicle).