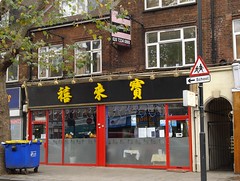 Super Nova was a Chinese restaurant/takeaway on Tower Bridge Road in Bermondsey. It closed some time in 2009 or 2010. The premises were advertised for rent for a while, until another Chinese restaurant called Crystal China opened there in autumn 2011.

The information below is retained for people who want to know what it used to be like as Super Nova.

Chinese restaurant/takeaway on Tower Bridge Road. They also do delivery, and you can order online from Just-Eat or from Hungry House. Prior to Autumn 2008, it was known as Sanh Hing, though at least initially the menu stayed pretty much exactly the same.

Kake and doop have ordered several times from Hungry House with no problems, most recently in June 2009. Food has always arrived hot, sensibly packaged, and on time.

Note that the above all relates to takeaway orders. secretlondon visited for an eat-in lunch with a colleague in March 2009. This cost £9/head for mixed starters and three main-course dishes, all of which we enjoyed. There was no-one else in the restaurant. Background music was playing. They are licenced.

Kake's verdict: I might order from here again if I fancy mock meat, but I don't think I'd bother if I wasn't in a mock meat mood. I'd like to go and eat in some time to further investigate the Chinese menu that I photographed in late 2008; it's possible that this is one of those places that can actually cook decent food but is also happy to churn out the gloopy sauce stuff for the masses.

Accessibility: No step to entrance, toilet not checked.