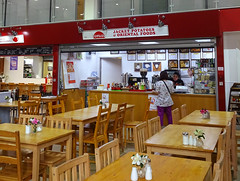 Filipino cafe on the first floor of Romford Shopping Hall, an old-school shopping mall just off the main street in Romford.

It's fairly casual, consisting simply of a serving counter set into the interior wall of the hall with seating for around 40 or so people in the space in front. Chairs and tables are pale varnished wood, and the floor is the same utilitarian grey vinyl as the rest of the hall. It's all very clean, though, and there are small artificial flower arrangements on the tables to brighten things up a bit. As it's all open-plan, the view is of the British cafe next to it (a similar setup, though somewhat larger) and the glass windows of the free-standing shop units in the centre of the hall.

Kake has visited twice now, most recently in October 2018. On a Thursday morning in November 2017 there were no other customers when I arrived shortly after their opening time of 9am, but others turned up while I was there. Service was friendly and welcoming. Music was playing on the shopping hall sound system, not quite loud enough to impede conversation, but loud enough to be a bit annoying in the rather echoey space. On a Friday lunchtime in October 2018 it was about half full at 12:15pm, and no music was playing.

Arroz caldo (Filipino congee; £6 in Nov 2017) photo was slightly saltier than Kake would have preferred, but had a good flavour aside from that, helped by the soft shreds of ginger within. The texture of the rice was good; not too thick and not too loose. There was quite a lot of chicken in it, but this was in large pieces and rather dry, and I think next time I'd just ask for it to be left out. There was also a large hardboiled egg, which was fine, and a sprinkle of pork floss on top. Fried tofu and pork belly came on the side, with a vinegar-based dip.

Palabok (prawn noodles; £7 in Oct 2018) photo was quite tasty. The noodles were thin and tender, sprinkled with well-fried garlic, chopped smoked mackerel, and sliced spring onions. The prawns were well-judged, and although the boiled egg on top had a grey ring around the yolk it was boiled just right, not overly hard and with a nice tenderness remaining in the white. The fried chicken drumstick on the side was very dry, and Kake left most of it.

Mixed Filipino breakfast (£8 in Oct 2018) photo included two fried eggs, fried rice, and meats of your choice from a selection of six; bob chose tapa (pan-fried marinated beef) and lechon kawali (simmered and deep-fried pork belly). The fried eggs had properly runny yolks, and the beef was tender with a well-flavoured marinade. The pork had nicely crispy skin, though the flesh was a little dry.

A cup of regular tea (70p in Nov 2017) was a generous size and arrived weak as requested. A small serving of iced tea (£2 in Oct 2018) photo was actually about three glasses' worth; it was fine, clearly made in-house, with a good balance of tea to lemon but a little too much sugar for Kake's taste. No service charge was added, but there was a tip jar by the till.

Kake's verdict: I'd come back if I was in the area, but I'd avoid anything with chicken in.

Child-friendliness: They have at least two highchairs, the type with no tray and very little back support. There are nappy changing facilities in the ladies' and accessible toilets on the same floor (gents' not checked).

Accessibility: Step-free via a lift. The shopping hall toilets are on the same floor with no steps in between, including a RADAR-locked accessible one.