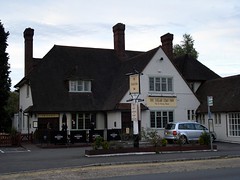 Note: As of October 2017 the Sugar Loaf is closed and partially stripped out internally photo, but due to reopen within the next couple of weeks under new ownership as a gastropub serving Charles Wells beers. Many of the details below are likely to be out of date after the reopening.

It's a little bit posh, but not pretentious. Quite focused on food, but you can come in and just have a pint (not sure if the dining room and conservatory are restricted to diners at busy times, though).

Comfortable seating, including a couple of leather sofas in the front bit. Proper pepper and salt grinders on the tables; thick (albeit paper) napkins; nice cutlery. The music is unobtrusive. There's a reasonably-sized (though not huge) garden out the back, reached via a conservatory set with dining tables.

Kake's first visit was mid-afternoon on a Tuesday in March 2007, when it was pretty much empty apart from a few locals. On another visit, late afternoon on a Sunday in September 2007, it was busier, and filled up even more before we left, though not to uncomfortable levels. There were a number of children, who were well-behaved enough.

The food's pretty good, if not cheap; as of September 2007, starters were around £5-6.50 and main courses around £11-15. Kake had the fish pie on her March 2007 visit; it was full of large chunks of tasty salmon and white fish, along with some prawns. Unlike most pub fish pies, it wasn't oversalted, it didn't have too much sauce, and it was served at just the right temperature, hot but not scalding. Good stuff. The herb buttered carrots on the side were a bit disappointing (slightly overcooked, and not very flavourful). Lunch was supposed to end at 3pm, and I was nearly half an hour late, but they fed me anyway, hurrah!

An anonymous visitor (April 2009) tells us that there are cocktail nights on Wednesdays.

Beers on offer are Landlord (Timothy Taylor), Broadside (Adnams) and Bitter (Adnams). A pint of one of the Adnams was £3 as of September 2007. They also have Hoegaarden and Staropramen amongst the usual lagers.