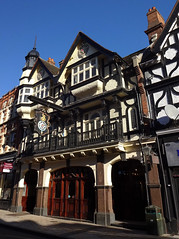 Pub in Bromley, in the Good Beer Guide. According to WhatPub (linked below), it reopened in November 2016 after a period of closure, with new management and having undergone a substantial refurbishment.

The original frontage has been retained, with etched glass and mosaic-tiled entrance lobbies (no longer functional — the actual entrance now is the door in the middle). The wooden bar also appears original. However, the rest of the decor is quite modern, including a striking brushed-metal (gas) fireplace. Seating is a mix of church pews, backless benches, and freestanding chairs and tables. Out the back is a decent-sized patio beer garden.

Kake, Ewan, and friends visited on a Monday evening in October 2018, arriving shortly after their opening time of 4pm and departing around two hours later. There were a few other customers in during our visit, but it certainly wasn't even approaching full.

The eight handpumps (six on one side of the bar, two on the other) were clipped for seven real ales and one cider, including Magic Rock Hat Trick (£1.50/half), North PiÃÂ±ata (£1.50/half), Wander Beyond Brewing Daze, Siren Half Mast, Five Points Green Hop Fuggles (£1.50/half), and Saltaire Mosaic. Coke (£2) was served from a glass bottle.

According to the 2019 Good Beer Guide, it doesn't serve food but customers are welcome to bring/order some in from local takeaways.

Accessibility: A small step to get in, no more than an inch or so. RADAR-locked accessible toilet on the level. Other toilets are up 19 stairs (Ewan counted them). There are steps to the beer garden.