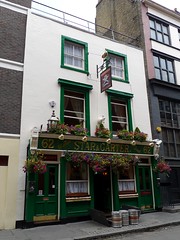 There's nothing particularly surprising or unusual here, just a well-kept characterful old pub room with wooden fittings, historical photos, and small but comfortable tables. There's a TV showing horse racing and the like, but it's easy to avoid and not loud at all.

It can get busy, but after work on a Tuesday in June 2008 wasn't too crowded. On a Friday evening in late Summer of the same year, the outdoor street was crammed with people, but inside there was still some seating available. Numbers die down later in the evening as people move on to the clubs. Early on a Saturday evening in May 2013 it was quite quiet.

They have an upstairs room as well, and there are signs advertising that it is bookable, though in Ewan's experience it's only occasionally been open, and they close it earlier than downstairs. However, it's pleasant and not too crowded, and has one handpull with London Pride.

On a visit in June 2008, the ales on pump were London Pride, Shepherd Neame Spitfire and Greene King IPA, entirely unchanged in January 2013 (albeit a little more expensive, by now £3.80/pint). The ales were again the same on our May 2013 visit, and still the same in September 2016.

There are filled rolls available behind the bar.