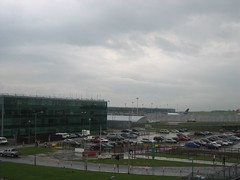 Stansted is an airport in Essex about 30 miles from central London. Stansted has a single terminal, with a direct rail connection to Liverpool Street Station, trains taking 46 minutes, departing every 15 minutes on weekdays. It is considerably cheaper to buy your rail ticket either 7 or 30 days in advance.

Stansted mainly serves European destinations, and feels as crowded and stressful as other London airports. Ryanair and easyJet both use Stansted as a major hub.

There is a Wetherspoons in the main departure lounge, named "The Windmill". On a Saturday at 6pm it took 5 minutes to get served (many food orders), but the pint of Bombadier for £2.39 was quite drinkable, and without excessive head. In the main departure lounge Nick could only spot a single exposed mains socket (roughly under the large fire hose, on the runway side of the island containing Starbucks). However, in the area of the gates that Ryanair use (40-59) there were several double sockets on an island opposite gate 48, and two in the corridor outside the gents toilet, where there is also a drinking water tap. (Remember, bringing a bottle of water through security theatre is slapped down, but empty bottles are fine). In this area there is also a smaller duty free, and possibly (Nick forgets) another bar.

In January 2015 the airside Wetherspoons was selling a cooked breakfast for about £10, compared with other Wetherspoons which sell that for £3 or so.

On return, it may pay to be in the right-most of the "EU passport" queues for immigration; one Sunday they were also using the next desk across for EU passports (instead of "All passports"), but they cannot change the queue barriers, so the right-most queue actually fed two desks, and consequentially moved much more quickly.