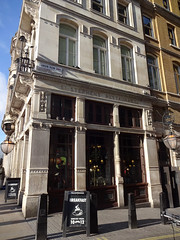 It has two bars, both pretty small. On Kake's visit, early Saturday evening in May 2008, the one on the left as you go in seemed more touristy but I don't know if it always is. The lower bar, at the front corner of the building, has some eye-catching wooden panelling rising behind the bar and is very impressive.

It does get busy, due to its location - at 4:30pm on a Sunday in December 2008, it was so rammed that Kake and bob didn't even bother going in.

There are a few fairly narrow and high bench things stuck to the outside of the pub; Kake's feet were dangling (I'm 5'3", for reference). The weather was good so there were also drinkers sitting on nearby walls and steps.

Food is served 10am-9pm daily - breakfast until noon, the full menu from then onwards. The food is perhaps not as good as it could be. The roast beef on bob's January 2008 visit was dry and tough, and the vegetable portion was a touch stingy. Other people's food looked okay though.

The upstairs room is bookable and can fit about 30 people.

Getting here: It's very close to the station; come out of exit 4 (marked "Bridge Street"), turn right, walk to the end of the covered walkway and it's right in front of you.