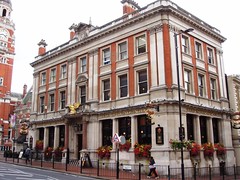 The usual selection of Fuller's beers are available here, as well as a guest ale. In August 2012 they had London Pride (£3.40/pint), Chiswick, ESB, HSB, and Wild River on handpump, along with London Porter on keg. A notable guest in November 2012 was the locally-brewed Clarence & Fredericks Best Bitter, while on our December 2012 visit there was a pump marked "coming soon" for Clarence & Fredericks Redcurrant Stout. In May 2013 the guest was another local one, Kotchin from the Cronx Brewery. In February 2013 a pint of lime and soda was £1.20.

According to their website as of May 2013, food is served noon-3pm and 5pm-10pm Mon-Fri, noon-10pm Sat, and noon-6pm Sun. In January 2009, Robbie found the fish pie (around £9) to be a reasonably generous individual portion topped with cheesy mash. A steak burger was similarly priced and quite substantial, with the beef still a bit pink in the middle (though they don't ask you how you'd like it). The chips were of the "enormous slices of potato" school of thought, but tasty nonetheless. In May 2013, Kake's fish pie (£9) photo was OK; the prawns and fish inside were somewhat overcooked, but the leeks were a nice touch, and the accompanying parsnips, red cabbage, carrots, and mashed potato were fine. It's worth noting that their non-fish pies are true pies; i.e. they have pastry all the way around.

They have free wifi; the access code is on a board behind the bar and also printed in the front of the menus. According to a sign seen outside in September 2017, there's a quiz every Sunday at 8pm.

There is a bookable function room upstairs with three distinct areas. As of August 2012, they don't charge for this but they do require a £50 deposit (which will be refunded as soon as you arrive on the night); they will also put a staff member on the upstairs bar at no charge if you can promise at least 30 attendees.

Side entrance has no steps. Level to bar. There is an accessible toilet on the same level. Other toilets down in the basement. Stairs to theatre upstairs where there is some men's toilets as well.