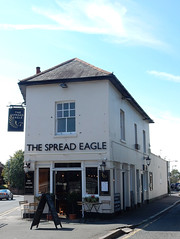 This wedge-shaped pub is at the junction of two roads, with one entrance at the thin end of the wedge and another along the side. It's on the upmarket side, with real flower arrangements on the tables, and a feel that someone's paid careful attention to the decor. Scones sit on a wooden board on the bar, next to dome-covered cakes.

Half-panelling on the walls is painted with a distressed effect, and the flooring is variously hardwood, stone-effect tiling, and patterned carpet. Out the back is a small, part-covered patio garden; a sign here invites those who're feeling cold to ask the barstaff for blankets.

Kake visited on a Friday lunchtime in September 2015. Both inside and outside were quite full when I arrived a little after 1pm, with only a few free tables. Music was playing, not too loud. The coffee machine was in constant use, with people popping in for takeaway skinny lattes and the like.

There were three real ales on: Bass, Hambleton Ales Nightmare, and Backyard Centennial IPA. Shelves behind the bar offered a small but well-chosen selection of spirits, and a small chalkboard on the bar advertised a range of bottled craft beers. A pint of lime and soda was £1.25.

Food is served, with a focus on BBQ meat photo of menu as of Sep 2015, though it's not clear what times.

According to a board seen in September 2015, they hold regular events including a weekly knitting group.

Accessibility: A very small step at the side entrance, but the doorway is very narrow, and the doors are heavy. No steps to the toilets once you're in, and the ladies' has a cubicle with a door that opens out. A step to the garden.