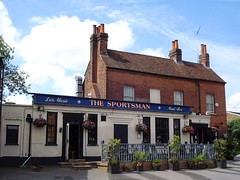 The interior wraps around the bar, starting at one end with a fairly bare space containing a pool table and large flatscreen, and ending in a cosier carpeted area with a pile of board games. There's some patio seating out the front, and more out the back.

It has seven handpumps, including one dedicated to real cider. On our August 2013 visit the ales were Chiltern Croxfest Gold (a special ale brewed for the Croxfest music festival), Sharp's Doom Bar, Sharp's Bebbo's Blonde, Dukeries Lime Tree Porter (£1.65/half), Buntingford 92 Squadron, and Hydes Jekyll's Gold. The cider was Westons Bounds Scrumpy. Pump badges for the next ales due on were displayed in a frame next to the bar. They have their own branded pint-to-line glasses.

Kake visited on a Friday afternoon in August 2013. There were five or so other customers in. No music was playing, and the flatscreens were switched off. It was a nice peaceful place to spend some time, despite the busy-ish road outside.

Accessibility: Three steps to get in. No more steps to the bar, seating, pool table, or toilets once you're in.