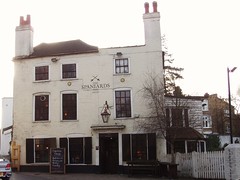 A Castle (Mitchells & Butlers) pub in Hampstead. Claims to have 23 draught products, refreshingly few of which are standard lagers. Cask Marque plaque at entrance.

Keats is reputed to have written "Ode to a Nightingale" in the gardens, and Charles Dickens mentioned the Spaniard's Inn in his novels. The gardens are superb, particularly in summer. They include an aviary! Inside, the place is a warren of small wood-panelled, and somewhat claustrophobic rooms.

Despite a really nice selection on tap, [Joel]? went for bottled beers on a visit in March 2008, of which there was an excellent selection too. The Goose Island IPA (a very floral/fruity American IPA) was delicious, and I was very glad to see Aecht Schlenkerla Rauchbier (a dark German smoked ale) and Fuller's Vintage Ale 2006 in the fridges too. We particularly enjoyed Karmeliet Tripel (a 3 grain belgian golden ale, very fruity smelling), and the Rauchbier.

The food looked OK but not outstanding — good for most areas but not a patch on some of the other Hampstead and Highgate pubs.