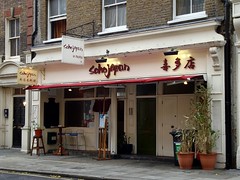 A former Japanese restaurant which was closed by early-2013 and as of February 2013 is being refit.

Japanese restaurant which more fully calls itself "Soho Japan in Noho", in Fitzrovia, izakaya (Japanese pub) style. In fact, the premises used to be an Irish pub, and the new owners have kept the Guinness posters around. Sitting at the sushi bar, you're actually sitting at what used to be the bar of the pub. Good range of sake too, apparently.

The menu is available on their website, or you can view Kake's photos of the lunch menu as of November 2007: page 1, page 2.

In mid-2009 the owners also purchased the ex-Puzzle pub on Gray's Inn Road in Holborn, and opened it as a second branch called Crane and Tortoise (reviews: Time Out, London Chow).