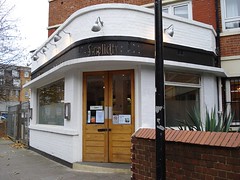 It's quite small, seating only about 40 people, so booking is recommended on the weekends. There's also a small outside seating area, but it's not covered.

Kake and friends have visited several times now, most recently in April 2015.

Kake and doop first visited on a Saturday evening in November 2007. When we arrived shortly before 7pm it was fairly empty, but an hour later it was practically full. There was piped music, but they had the very good sense to turn it down as the level of conversation increased. We started with bread and marinated olives (£2.50); we failed to properly communicate that we'd like two portions, but actually the single portion was plenty for two to nibble on. For mains, Kake had the ribeye steak with bearnaise sauce, sauté potatoes and seasonal veg (£14), which was fine if unexciting. doop had the duck breast with seasonal veg (£14, I think).

On another visit by Kake, bob, and family in April 2011, the place was basically empty at 1:30pm on a Sunday. Most of the menu options were brunch items, but they did have a few main courses such as sirloin steak (£15.25) photo and chicken salad (£13.35) photo. bob's full English breakfast (£8.25) photo used good-quality ingredients. Kake's vegetarian eggs benedict (£8) photo featured a perfectly-poached egg (though only one egg, not two), plenty of spinach, and a tangy but not overly-vinegary hollandaise sauce; the mature cheddar that was in there somewhere seemed unnecessary though. Fresh orange juice (£3.50) was pricey but pretty good.

Kake, Bec, and Pippa visited for brunch in April 2015. There were only two other customers in when we arrived around 11am, but several tables had "reserved" signs on them, and the place started filling up around noon. Music was playing, not too loud. Eggs florentine (£8) photo was an improvement on the version we tried in 2011; two nicely poached eggs with a generous amount of spinach and no unnecessary cheese. The muffin was a little too chewy though.

Kake's verdict: Probably one of the best options in the area for British/European food (the Yellow House being the other), though perhaps not worth much of a journey.

Accessibility: A step to get in. No further steps to the toilets, but there is a tight corner on the way.