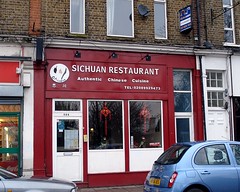 As of June 2013, Su-Lin reports: "Saw some activity in the now closed restaurant a couple nights ago but they may just be cleaning it out. No idea what the site will become — probably yet another bloody estate agents."

Sichuan restaurant in Acton, also known as Chuan. Interestingly, its Chinese name is 思川, which is pronounced exactly the same as 四川 (Sìchuān) but has a different meaning — perhaps something like "river of memory" (or, to borrow a pun from Mr Noodles, "stream of consciousness").

They also do takeaway, and you can order online via Hungry House. Unlike many other places that do online ordering, the online menu actually includes the more interesting dishes such as stewed pig trotters, and pork tripe in chilli oil.

bob and Jack visited on a Friday lunchtime in January 2009. We arrived just as they were opening at 12:30pm, and we were still the only customers by the time we left at 1:10pm or so. Spicy beef in a pot with chillies (水煮牛肉/shuǐ zhǔ niú ròu/water-cooked beef; £8.80) photo had good-quality beef in a subtle blend of chillies and Szechuan pepper. The portion really was quite large. bob would have preferred it with more chillies, but when we talked to our waitress afterwards she told us they're happy to add more if you ask. Double-cooked pork Sichuan style (家鄉回鍋肉/jiā xiāng huí guō ròu; £6.80) photo was very good; the pork was very bacony and the sauce it was in was quite good as well. Plain noodles with bean sprouts were fine. Chinese tea was £1 per person.

Kake and Ewan visited a year later, on a Wednesday evening in March 2010, as part of a group of seven. We'd pre-booked, and were seated around a large table in the basement dining room (the rest of the place remained empty during our visit). We left most of the ordering to Su-Lin, who's been here several times before; she chose us a range of dishes from the "chef's specials" photo and "Sichuan-style dishes" photo sections of the menu .

Sweet and sour eggplant dragon (£9.80) photo showcased a spectacular presentation, and although the flavour was a little sweet for some of our tastes, this is not to be unexpected in a sweet and sour dish. Dry-fried green beans (乾煸四季豆/gān biān sì jì dòu; £6.50) photo were liked by most of our party, though Kake felt they would have been better made with younger beans. As on our previous visit, the spicy beef in a pot with chillies (水煮牛肉/shuǐ zhǔ niú ròu; £8.80) photo was decent enough, with nicely tender beef. Baby cuttlefish in a spicy sauce (泡椒墨魚仔/pào jiāo mò yú zi; £12.80) photo were OK, though nothing special. Fried minced pork with vermicelli (螞蟻上樹/mǎ yǐ shàng shàu/ants climbing a tree; £6.50) photo was disappointing, with the flavour heavily dominated by soy sauce.

Service was friendly and sweet, if a little confused at times (they didn't have one of the wines we ordered, but instead of telling us this just brought us something completely different). A 10% service charge was added to the bill.

Kake's verdict: I'd probably come back if I was planning to be in the area, though I don't know if I'd make a special journey since there are quite a few Sichuan restaurants in London now.

bob's verdict: The menu has some interesting things like stewed pig's trotters, pork tripe, and tongue. I shall have to go back and investigate. It was certainly worth the 15 minute bus ride from Chiswick.