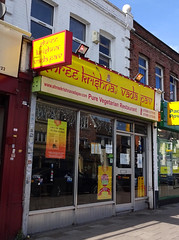 Vegetarian Indian cafe in Harrow, specialising in food from Mumbai. They also do takeaway. It was previously at number 63 photo, but around 2014 it moved a few doors down to its current location at number 55.

If anything, the new location is even more casual than their old premises. A small square room holds freestanding tables and chairs for around 20 people, with a small service counter in one corner. Next to the counter are a few shelves holding packaged savoury snacks, chutneys, and so on. Boxes of tissues sit on the tables, and the counter has disposable cups and a plastic jug of water for people to help themselves.

Kake first visited at the old location, early on a Monday lunchtime in July 2013. I was the only customer when I arrived around 11:30am, aside from one other person who popped in for a takeaway cup of tea. Indian music was playing, not overly loud.

Pani puri (£3.50) photo weren't bad; the puri were just the right size for popping into one's mouth, and the chickpeas provided as filling were nice and soft. The flavour of the pani was a bit murky, though, and overall it didn't have the zing it should have had, even after liberal application of the tamarind chutney.

Pav bhaji (£4) photo was likewise fine without being notably special. The roll was nice and soft, and generously buttered, but the flavour of the bhaji was a bit generic. The accompanying chopped red onion went some way to remedying this, but the lemon wedge provided was fairly useless, consisting almost entirely of thick peel.

Kake and friends visited again, at the new location, on a Saturday lunchtime in March 2017. Most of the tables were occupied when we arrived a little before 12:30pm, but turnover was fast and we didn't have to wait to find a seat. Music was playing, not too loud.

The eponymous vada pav (£1) photo was pretty good. Although this is essentially carbs-in-carbs, there was an enjoyable contrast between the spiced patty and the slightly sweet bread. Veg grilled sandwich (£3.25) photo was also good; properly toasted, and the vegetables were fresh.

Pani puri (£3.50) photo were fine, though as before not among Kake's favourite renditions ever. Two of the five shells I tried had minor leaks, though not bad enough to be unusable, and there was only a very small amount of filling provided (stewed chickpeas). The pani possibly had more flavour this time around.

Bhel puri (£3) photo was a little sweeter than I prefer — I wanted more sourness and zing. Dabeli (£1.75) photo was also overall a little too sweet for my liking.

Masala tea (£1) was nicely spiced, with a distinct but not overwhelming ginger flavour, and — in contrast to some of the food — not too sweet. It was served in a disposable cup even though we were sitting in.