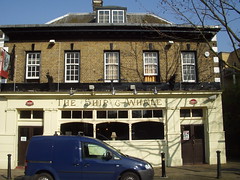 There are plenty of solid wooden tables around the long room, stretching back to a decent sized beer garden out back. A very long bar dominates the room photo. There's a separate smaller room in front of the main entrance, where the toilets can be found photo. A large-screen TV stands in the corner of the room, behind some large leather couches.

When bob visited on a Sunday afternoon in April 2007, the food looked quite good and quite a few of the tables were pre-booked.

Ewan, Kake, secretlondon, doop and Jo visited again on a Monday evening in September 2008. The TV was turned off. Music was playing in the background, and was for the most part not too off-putting, though perhaps just a touch too loud for entirely comfortable conversation.

On bob's April 2007 visit, the beer was pretty good, and the porter was £2.85. In September 2008, despite having seven handpulls, only two were on (Spitfire and Whitstable Bay, the latter £3.05/pint), and one other was off (Cornish Buccaneer). They also had Oranjeboom and Holsten lagers, as well as a few others, but the selection of beers wasn't great. However, the tempranillo was a perfectly decent red wine at £17 a bottle.

In September 2008, a few of our party tried the spicy bean burgers (£9), which they offer with a variety of toppings (there are four burgers and about eight toppings, to be mixed and matched) — Ewan's mushroom and caramelised onion burger was very tasty, as were Jo's and doop's with mozzarella and onion. The fries on the side were not exactly chunky as advertised, but were hand-cut and of a very high quality.

Kake had a hefty steak (£13 for a 12oz sirloin) photo. This was more meat than she actually wanted, but 12oz was the only size of steak available. It was cooked rare as requested, and with very good charring on the outside; recommended, if not cheap. secretlondon's mixed grill was a bit cheaper at £9, but not quite as good in quality as the steak photo. She thought it was overpriced for what it was. Note that neither of these meals included any sides other than a small salad; more substantial sides (such as green beans or chips) were priced separately at £2.50 each.

secretlondon was still hungry and ordered the vanilla cheesecake for £5 photo which wasn't very exciting and the accompanying ice cream had bits of ice in it.

A sign seen in September 2008 advertised a quiz night on Tuesdays.

Accessibility: Step-free access to the main seating area, the bar, and the toilets. Not sure about the beer garden.