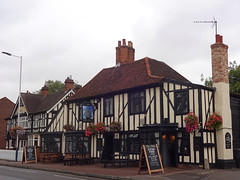 It has several different areas inside. The small front bar has a couple of seats, but its main furniture provision is two large barrels for resting your drink on. A huge fireplace adds interest. There's also a snug off to one side, two larger rooms further in, and a patio beer garden out the back.

Ceilings are low, with exposed beams. The large room which leads onto the beer garden has a fireplace set into an exposed-brick wall, wood panelling at the back, and two leaded bay windows looking out onto the street. Flatscreens here and there seem somewhat incongruous in this context.

Kake has visited twice now, most recently in October 2018. On a Saturday afternoon in September 2016 there were quite a few people in when I arrived around 3pm, though still several free tables. Retro pop music was playing, not too loud. Service was welcoming and helpful. On a Friday afternoon in October 2018, there were a handful of people inside at 3pm and around the same number on the benches out the front. Smooth Radio was playing quietly.

On both visit, four of the six handpumps were clipped for real ales. In September 2016, Robinsons Dizzy Blonde was £1.75/half), and Kake was offered a taster without having to ask. In October 2018, the ales were Timothy Taylor Landlord (£3.70/pint), Greene King IPA, St Austell Tribute, and Sharp's Doom Bar; and a pint of lime and soda was £2.

According to a menu seen in October 2018, food is served noon-8pm Mon-Fri and noon-6pm Sat-Sun.

In September 2016, Kake's beef kofte (£5.10 for a starter portion) photo weren't great; the texture wasn't bad, with just enough chew to be interesting, but they were very underseasoned and rather dry. They'd also leaked quite a lot of liquid onto the plate. The accompanying tzatziki was nicely creamy, though, and the cucumber in it tasted fresh.

They have free WiFi, with the network details and password on a sign on the wall by the bar. According to the 2017 Good Beer Guide, there's a quiz night on Thursdays and live music on Saturdays.

Kake's verdict: Although the food was disappointing, I liked it here and would come back.

Dog-friendliness: According to their website as of September 2016, they're dog friendly.

Child-friendliness: There's a pull-down nappy change table in one of the ladies' cubicles, but nothing in the gents'. They have a small children's menu photo with only one vegetarian option.

Accessibility: No steps to get in, but access is fairly narrow. There's a step just inside the door to the ladies' toilet, but no steps to the gents' (although the top of the doorway on the way is very low).