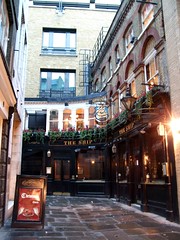 A Nicholson's pub not too far from Monument and Fenchurch Street stations, in the City of London.

This pub is hidden away in a courtyard just off Eastcheap, and is on two levels, with a narrow winding staircase by the front door. Upstairs are tables for seating, with a slightly larger area up some stairs at the very back, as well as a smaller bar which wasn't being operated on the Friday evening Ewan visited. The main bar is downstairs, where there is only room for resting pints along the windowsills. This area gets extremely busy at peak times, such as Friday evenings.

On our Friday evening visit in February 2009, there were still some tables available upstairs just after 5pm, but by 5:30pm even upstairs was getting packed. Downstairs, the crowds were spilling out into the courtyard and taking up a lot of space. However, the mostly City workers started to head home and by around 7:30pm the place was less busy.

The bar itself has eight handpulls for ale (two more at the bar upstairs), with London Pride, Young's ordinary, Adnam's Broadside and St Austell Tribute (£2.70/pint) apparently the permanent offerings, as well as a few rotating regulars like Timothy Taylor Landlord (£2.90/pint), Sharp's Doom Bar, and Deuchars IPA, and a guest. Prices are reasonable for this part of town.

Food is served, though on a busy Friday evening, they wait until about 7pm before allowing food orders. Ewan and a friend took advantage of a two meals for £10 offer (with a more limited selection than the full menu, which focuses on pies). Ewan's vegetarian spinach and lentil burger was perfectly decent, served in a ciabatta roll, with a good number of chips. Unfortunately, Sarah's chicken burger and chips were cold, and would have been returned if the place hadn't been as frantic. Later orders of chips for the table were hot.