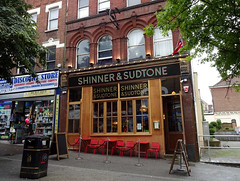 Note: In late 2020, a notice appeared on the Shinner and Sudtone website stating that several pubs, including this one, had been taken out of the hands of Antic and transferred to the management of Portobello Brewing; but that Antic intended to "do all that we can to ensure that these pubs are returned to the Antic Collective, sooner rather than later". It remains to be seen whether this will happen.

The decor is somewhat more coherent than your generic Antic pub, with an old-school museum/antique shop theme. The bar is made from what looks like an old antique shop counter, with glass cases containing porcelain items from owls to shepherdesses above card-catalogue drawers with brass handles. Large banquetted seating areas opposite are divided up by tall racks of pigeonholes filled with old books and yet more porcelain.

Other standard Antic touches are also present: worn mosaic flooring, random tiling on the walls, and so on photo. A shelf at the end of the room holds board games from the classics to newer games such as Exploding Kittens and Cards Against Humanity.

Kake, Kat, and Ewan visited on a Wednesday afternoon in August 2017. There were a handful of other customers in when we arrived shortly after their opening time of 4pm. Music was playing, not loud enough to impede conversation. There were three real ales on: Volden Session Ale, Volden Summer, and By The Horns Mayor of Garratt. They also had Lily The Pink real cider on handpump.

According to a poster seen in August 2017, there's a pub quiz on Tuesdays from 8pm.

Dog-friendliness: Dogs are permitted, and they have a selection of treats specifically for dogs photo.

Accessibility: Two steps to get in, and more to the restaurant area at the back. Step-free to bar and toilets from the lower seating area, including an accessible toilet.