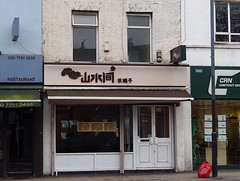 Chinese restaurant in Limehouse. The name is a direct transliteration of the Chinese (山水间).

It specialises in lamb neck hotpot: a cauldron of dark, soy-scented broth based on thick slices of lamb neck — bones and marrow included — which simmer slowly at the bottom of the pot while diners add their choice of other things. It also has a regular menu of interesting regional Chinese dishes.

The decor is fairly basic, with brightly-painted walls, a low ceiling, and a tiled floor. Electric hotpot burners are inset into each table, with cables trailing below.

Kake and friends visited on a Wednesday evening in December 2015. We'd booked in advance, but probably hadn't needed to, as there was only one other party in when we arrived around 6:30pm, and plenty of free tables throughout our visit. No music was playing.

We were here for the lamb neck hotpot, and chose the large size, which came with ten pieces of lamb neck and cost £18/head as a base (i.e. not including any other ingredients) photo including several plates of extra ingredients.

Standout ingredients included the Fuzhou-style fishballs, stuffed with minced pork; an extended simmering left the fish paste exterior firm and chewy, while the broth made its way into the interior to moisten and flavour the pork filling. New Year rice cakes also benefited from a long soak in the broth, softening and taking on the savoury flavours. Leaf tripe and frozen tofu were ideal for soaking up the broth too.

We left the lamb neck itself to simmer almost until the end of our meal; this turned out to be the right decision, as when we finally fished it out, it was beautifully tender, and the bone marrow was fully imbued with the savoury broth.

Service was a little awkward in places, and they initially forgot to bring the tap water we'd asked for (when it did arrive, it came nicely chilled in a swing-top bottle), but in general was prompt and helpful, and they didn't mind us moving the chairs around to make sure everyone in our party had equal access to the hotpot.

Our final bill photo, including plenty of food and three bottles of wine between the three of us, came to £25/head including the auto-added 10% service charge.

Child-friendliness: They have at least one highchair.

Accessibility: A large step to get in. Toilets are up a flight of stairs with a sturdy handrail on one side.