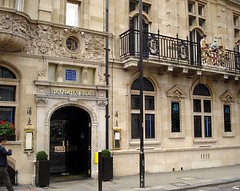 Shanghai Blues was a Chinese restaurant near Holborn Station. It closed down in early 2016 and has been replaced by a branch of Burger and Lobster.

The interior is quite nice; they've gone for the sophisticated no-natural-light dark-colours kind of look, and the space is divided up into a number of different areas, including some mezzanine-style seating in little booth-like balcony things overlooking the main dining area. There's live jazz on Friday and Saturday evenings.

The dim sum menu includes a separate vegetarian section, with half a dozen choices, and some of the dim sum are also available in the bar area as "lounge snacks". They have an extensive wine list, including a few sakes, and a large spirits list, including some shochu. They also do cocktails, non-alcoholic cocktails, and smoothies. The usual free or cheap Chinese tea is not available; instead they have a tea menu with teas priced per person (all around £2.50–£3.50 as of September 2010).

Kake and friends visited on a Thursday lunchtime in August 2010, to try the vegetarian dim sum options. We hadn't booked, but arriving at 1pm there was no problem finding us a table.

The food was all pretty good, and a nicely varied selection despite all being vegetarian — fried, grilled, and steamed options were all in evidence. Vegetable beancurd rolls (齋腐皮卷; £3.80) photo were light and crisp, not at all greasy. Crispy turnip puffs (蘿蔔絲酥餅; £4) photo were similarly well-executed, nice and flaky and with a well-flavoured filling. Steamed vegetable dumplings in carrot juice pastry (甘荀花素餃; £3.80) photo had worryingly thick-looking wrappers which turned out to be fine, and actually tasted of carrots rather than just looking orange. Monk's vegetables cheung fun (腐皮羅漢腸粉; £4.50) had nicely thin wrappers and a well-flavoured filling including crisp beancurd skin; the soy-based sauce was poured over them just before they were set down on the table to ensure nothing got soggy.

Service was fine; our teapots were topped up frequently, and they didn't mind us sitting around for a while after we finished our lunch.

On a previous visit by Kake, Leon, James, and others on a Thursday lunchtime in September 2008, we again hadn't booked, and although the place was only about half-full we were kept waiting in the bar area for some time before they seated us (they gave us free nibbles of pickles and salted nuts, though). Our party of six was given a nice big round table with a lazy Susan in the middle, and part banquette seating, part ordinary chairs.

Xiang Pian tea (£3/person) was a light jasmine-fragranced green tea that held up well to a second brewing and almost held up to a third. Xiao long bao (Shanghai soup dumplings; £4 for three) were served in dinky little individual baskets, balanced on top of carrot slices. Unfortunately we weren't given spoons to eat them with, and the wrappers stuck to the carrot slices and tore; they did seem to have a reasonable quantity of soup inside, though.

Sichuan filleted pork chop (£3.60) was OK, with plenty of Sichuan peppercorns, but the meat was nothing special, and some of the pieces had quite a lot of bone. Barbecue eel fillet pastry (£4.50) didn't quite work; the pastry was very rich, which combined with the richness of the eel became a little overwhelming. Yam croquettes with mixed meat (£3.80) were crispy, and the filling was well-flavoured. Pan-fried turnip paste with mixed meat (£3.80) differed from the normal presentation of turnip paste, as it had been cubed and fried, giving a well-browned exterior and a melting interior; Kake actually preferred it after it had cooled down and solidified a little, though, and as Dos Hermanos mention in the review linked below, the fried beansprouts et al. piled on top didn't really add much. Overall, though, the food was fine; the criticisms mentioned here are really minor ones, and generally a matter of taste.

Service was fine too, with prompt teapot topping-up and no problem bringing us tap water in iced-and-lemoned glasses. However, the cheung fun we ordered never arrived, despite our chasing it up after a while (it didn't appear on the bill though). In all, including a couple of drinks, we paid £11/head; we'd actually expected to pay a fair bit more than that, so this was a pleasant surprise.

Kake's verdict: I've been twice now, and would happily come back. I'm particularly glad to know a dim sum place that caters well for vegetarians.

Accessibility: A small step up to get in. A step down to one of the dining areas from the main level. Toilets are down a flight of stairs with one bend and a handrail.