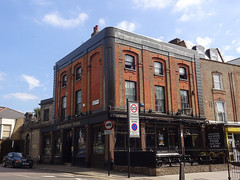 This is a nicely-restored old pub with several internal details of interest. It has two rooms, both with an airy and spacious feel helped by the large half-frosted windows, copious mirrors, and a stained-glass skylight in the back room. More frosted glass can be found on privacy screens separating some of the seating. There's also some outside seating on decking at the front.

Kake visited on a Wednesday afternoon in September 2016. There were half a dozen other customers when I arrived a little after 2pm, apparently all regulars. Music was playing (a Michael Jackson album followed by a Stranglers one), not too loud.

The eight handpumps on the bar offered three real ales and one real cider: Dragonfly 2 O'Clock Ordinary (brewed at their sister pub in Acton), Sambrook's Junction, Fuller's Oliver's Island, and Westons Rosie's Pig Handbrake. A pint of lime and soda was £1.50.

According to their website as of September 2016, there's a quiz on Tuesdays, and live music and cabaret on Thursdays and Fridays.

Child-friendliness: There's a short children's menu with one vegetarian option. They have at least four high chairs, the type with no tray and very little back support. We couldn't find any obvious nappy change facilities on our visit.

Accessibility: A step to get in at both main entrances, but there's a door leading directly into the back room that only has a tiny step, about an inch if that. Step-free to bar and seating once you're in. No steps to the toilets, though there is a tight turn and a slightly narrow corridor.