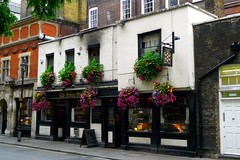 Pub just off Fleet Street and Chancery Lane, in Holborn. The pub was acquired by Fuller's in late-2011, but with no change to management or beer selection.

Inside, it's very small, more apparent perhaps during weekday evenings, when the place becomes crowded with those working in nearby law firms and the Royal Courts of Justice across the road. Even on the Saturday early-evening when Ewan visited, the rooms inside were largely full.

There are small rooms on either side of the bar area, with four or five tables and wooden benches. There's also a shelf area on the wall nearest the doors and some high stools. Plenty of odds and ends decorate the place, including photos of the landlady over the years. Sadly the pub cat, Tom Paine, is no longer in residence.

The bar has five handpulls. One Ewan's August 2009 visit, these featured Adnam's Bitter and Broadside, and Dark Star Hop Head and Old Chestnut. On bob's February 2010 visit, the Adnams Bitter was £3.10/pint and Dark Star Over The Moon was £3.30/pint. There are also draught lagers including Litovel and Bitburger, and Aspall's Suffolk Cyder.

A food menu is offered, and listed on a chalkboard by the bar. As of bob's February 2010 visit, most main dishes were priced around £10; onglet steak with sauteed potatoes was the most expensive at £12. A selection of cheeses was £8.50.

Ewan's verdict: This is a friendly pub, rather like being in someone's home (and indeed, when you go upstairs to use the toilets, it very much is). Beers are well-chosen and well-kept, and the place abounds in character.

Accessibility: Toilets are up some incredibly narrow and winding stairs behind the bar.