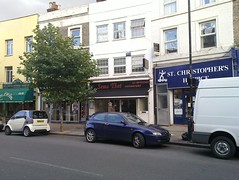 Sema Thai was a Thai restaurant on Lordship Lane in East Dulwich. According to Google Street View, it closed down by June 2014.

I had chicken sateh photo, tod gratleam prig Thai (beef with garlic) photo, and khao neuw sankaya (with glutinious rice) photo. The food was fine. I had a litre bottle of sparking water (£4) and the restaurant added on a 10% service charge making a total cost of £15.50.

There was some confusing background noise — it sounded like a television or radio merged with some background music from somewhere else. It was quiet enough not to annoy though.

Accessibility: There are steps to some tables but the toilets are before them. The toilet has a slight step/ridge and is quite tight.