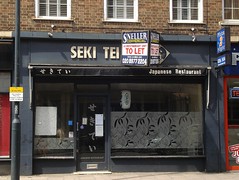 Seki Tei was a Japanese restaurant in Twickenham, but has now closed. As of May 2011 there were bailiff's notices up in the window and a "to let" sign on the frontage. As of October 2012, the premises are occupied by a Vietnamese restaurant called Pho Saigon.

bob visited on a Saturday evening in November 2009 (a match day). Unlike all the other restaurants in Twickenham on a match day it was empty, so getting a table wasn't a problem. Half a dozen other customers arrived while I was there, and I also saw them do several takeaway orders.

I started with kimchi gyoza (£4.20) photo, which were an interesting colour but didn't really taste of kimchi. For my main course I had a sushi set (Sushi Set B, £13.90) augmented with two eel nigiri (£3.50) photo, and some miso soup (£1.80); it was all fine. For dessert I had a red bean cake (£2.50) photo; this would normally come with chocolate but they left it off for me because I don't eat chocolate. It was disappointing.