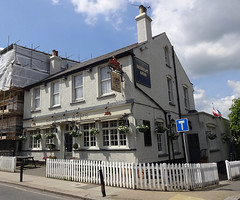 McMullen pub in Barnet. It's been in the Good Beer Guide a few times, most recently in 2010.

There's some outside seating at the front. An anonymous visitor (March 2009) tells us there's a very nice beer garden around the back, too.

On bob's September 2010 visit, half of the pub was booked for a loud young persons' party. The real ales available were Holt Humdinger (£3.10/pint), McMullen Country, and McMullen AK.

According to an email from the landlord (January 2011), they have table football and a dart board, and there's live music on Sunday evenings.