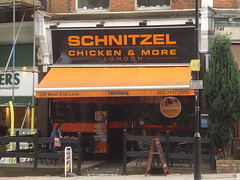 Small Israeli restaurant in West Hampstead. They also do takeaway and delivery.

The decor is fairly simple, but done in a striking combination of black and bright orange. Arty black and white photos of the area (with the cafe highlighted in orange) run along one wall, facing a strip of mirror along another. Ketchup, barbecue sauce, and mustard sit in little orange-painted buckets on the tables. It seats a dozen people at normal tables, eight more on tall stools at a counter along one wall, and a few more on the decking outside.

Kake visited on a Friday lunchtime in September 2014. There were four or five other customers in. Music was playing, not too loud.

I had the chicken schnitzel, garlic flavour, with a green salad and rice (£9.50) photo and a can of mango juice (£1.70). The schnitzel was good; the chicken was well flattened and the coating was crisp and not at all oily, with sesame seeds to add interest. The salad was generously dressed (perhaps actually too generously) with a tangy dressing, and included cherry tomatoes, cucumber, red onion, and sundried tomatoes as well as leaves. The rice was merely OK, though it looked nice with shreds of carrot added to brighten it up.

They also gave me a falafel to try, and it was pretty good — crisp on the outside, soft on the inside, and nicely complemented by the subtle tahini sauce.

Accessibility: No steps in, just a couple of little ridges, but the toilet is down four steps with no handrail.