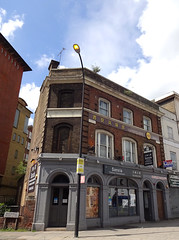 Sanxia was a Sichuan restaurant in Deptford. It closed down in October 2019, though as far as we know its other branches in Bromley and on Goodge Street remained open.

As of December 2019 the premises are occupied by another Sichuan restaurant called Jinjiang.

Sichuan restaurant in Deptford, with other branches in Bromley and on Goodge Street.

The decor is little-changed from its previous incarnation, with plain walls, a tiled floor, and paper Chinese lanterns hanging from the low ceiling. A couple of geometric wooden screens divide up the room, making it seem a little less institutional.

Kake visited on a Friday lunchtime in May 2019. I was the only eat-in customer during my visit, though the staff were also finishing up their lunch at one of the tables when I arrived just after noon, and several people came in for takeaways while I was there. Peaceful music was playing, not too loud.

I ordered from their lunch menu, choosing sea spiced aubergine with minced pork (鱼香茄子; £7.20 including rice) photo. The aubergines were cooked just right: soft but not falling apart, and rich but not greasy. The proportions of pork and aubergine were well balanced, and the sauce had a decent balance between sweet, salty, and spicy, with a good hit of ginger flavour too. The rice was fine, and the portion was just right for lunch.

Service was fine. A 10% service charge was auto-added to the bill.

Kake's verdict: I'd happily come back to this and both of the other branches.

Accessibility: No step to get in, and no steps to the toilets.