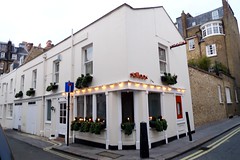 Pakistani restaurant of long standing, located in Belgravia. The restaurant itself consists of a single dining room on the first floor of an end-of-row mews house; entry is into the ground floor, where a small bar offers a couple of seats and a staff member waits to take your coats.

Kake and Ewan visited on a Saturday evening in March 2010. Arriving shortly after they opened at 7pm, we hadn't booked but were quickly led upstairs to a nearly-empty dining room, and even when we left around 9pm there were still a few free tables.

A couple of poppadoms were brought unrequested to our table photo; they were fine, completely free of grease (almost certainly due to being roasted rather than deep fried), but the accompanying mango chutney and yoghurt dips were run-of-the-mill and uninteresting. A "cover charge" of £1.50/head was later added to our bill, presumably for these.

We started with a shared order of lamb chops (£23.90 for a portion of four) photo, partly because they were touted on the menu as being the restaurant's signature dish, and partly to compare them with the same dish at Tayyabs (another of London's Pakistani restaurants, famous for its chops). Unsurprisingly, the Salloos rendition was altogether more refined. The bone ends had been neatly Frenched and almost all the fat removed, leaving a tender and well-spiced piece of meat. There was a small degree of inconsistency in the cooking; while one of Kake's chops was cooked to just the right degree of pink juiciness in the middle, the other was cooked more thoroughly and although not dry, was lacking succulence. Ewan was very happy with both of his, though.

We also shared our mains. Haleem Akbari (£18.50) photo, a dish of shredded lamb slow-cooked with wheat, lentils, and spices, had a pleasing texture and plenty of flavour, even before we customised it with the garnishes of chopped ginger, fried onions, sliced chillies, and garam masala provided on the side photo. Chana (chickpeas with tomatoes and onions; £9.80) photo wasn't bad; the chickpeas were cooked just right, but the dish was a touch oily. Bhindi (okra with tomatoes and onions; £9.80) photo was similarly not bad, with a soft sweetness from the onions, a nice bit of bite left in the okra, and no sliminess at all; again, there was maybe a bit more oil than necessary. All three dishes had a nice level of spice heat; enough to give a bit of a tingle, but not so much that it would overwhelm the palate of anyone who enjoys a good curry.

An accompanying paratha (£4) was good, with a fresh, distinctive wholemeal flavour and a soft, layered texture. Boiled rice (£4.50) photo was fine.

Service was fine. There was no problem supplying us with tap water, but we wished they'd left the jug on the table, since they were slow at topping us up (though perfectly assiduous with the wine). A 12.5% service charge was added to the bill.

Kake's verdict: You're paying for the location here; while the food was perfectly competent and the service polished, I felt it was overpriced for the quality of both. I also couldn't help making a comparison with other high-end restaurants, where you'd be more likely to be given a complimentary amuse bouche and palate cleanser than to see a charge on the bill for unasked-for poppadoms and a couple of indifferent dips.

Accessibility: The dining room is up a flight of stairs with a bend in the middle, and the toilets are on the ground floor. There may also be one or more steps to enter the building at all — not sure.