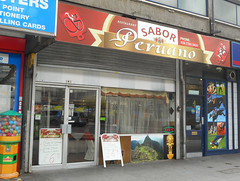 Peruvian restaurant near Elephant and Castle Station. It was previously El Paisita and then Donde Lucho.

It's quite small, seating only around 30 people. Tables and chairs are covered in white and red linen, the floor is tiled, and the ceiling is low. Mirrors hang on the walls, interspersed with posters promoting Peru.

Kake and secretlondon visited on a Friday early evening in May 2015. We hadn't booked, but there were only three customers in when we arrived a little before 5:30pm, so there was no problem finding us a table. However, it started to fill up during our visit, and would likely have been quite full later on. Some of the other customers, including a party with a couple of children, seemed to be in just for coffee and cake. Music was playing, not too loud, via a YouTube playlist on a flatscreen.

A small dish of salted roasted Peruvian corn photo was placed on the table as we sat down; Kake found this a little too dry, and unfortunately some of the kernels tasted slightly rancid. Glasses of tap water were brought on request.

We both decided to go for the trimarino (£15) photo, which was a combination of three dishes from the fish/seafood section of the menu. Taken together, it was a very large serving, and we might have been fine with just one order between us; they were happy to pack up the leftovers for us to take away, though.

Jalea was a mixture of fish and seafood, battered and deep fried, served with thinly-sliced crispy deep-fried plantains, more of that salted roasted corn, and an abundance of sliced raw red onion. Some of the fish was undercooked to the point of being almost raw in the middle, but in context this wasn't unpleasant. The corn was again rather dry. The plantains were nicely crispy, though, and as a whole it all worked rather well.

Arroz con mariscos was sauteed rice studded with peas, sweetcorn, and seafood including mussels, clams, and prawns, all still in their shells. The texture of the rice was a little stodgy, but the flavour was good, and the quantity of seafood was generous.

Finally, ceviche de pescado was cubed raw fish marinated with lemon juice and spices. The fish had an excellent texture, neither under-cured nor over-cured, and a good flavour too.

Service was a little slow, and they forgot to bring the second glass of tap water we asked for. No service charge was added to the bill photo.

Accessibility: No steps to get in. No steps to the toilets either, though access is down a corridor which on our visit was made narrow by being cluttered with boxes.