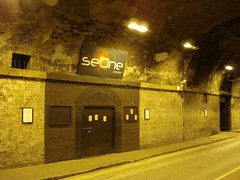 SEOne was a nightclub venue carved out of the railway arches beneath London Bridge Station. It closed in February 2010.

SEOne is a nightclub venue carved out of the railway arches beneath London Bridge Station.

Its website claims that it is "the largest licensed nightclub in London". It has a capacity of 3000, although it is often divided up into smaller areas, and can run two events simultaneously. The main entrance is in the tunnel on Weston Street, just off Tooley Street: this has the advantage that you don't have to get wet when you're queueing to get in.

Security can feel a bit full-on on the way in sometimes: there are metal detectors, and they can get a bit awkward if you even have a bag of crisps on you, but things are by and large fine once you're inside.

Bar prices are a bit on the steep side, and the loos (which are notable for glued-up toilet seats and lack of any horizontal surface inside the cubicles) do occasionally contain obsequious attendants. However, SEOne has nonetheless played host to a wide variety of very good club nights.

Note that the postcode and contact address for SEOne are for St Thomas Street; if you're going to the club itself, you want to head for Weston Street.

doop visited along with Marna, Pete, Kat and Rick in October 2008: the security now takes a very long time, possibly because they're being more thorough since a shooting there a few weeks ago. Several of the cubicles in the gents' ran out of paper, but the resident toilet attendant didn't seem to care. There's now some sort of smoking area, but the queue for it collides with the queue for the cloakroom, which makes getting into a crowded club even more of a pain than it is normally.