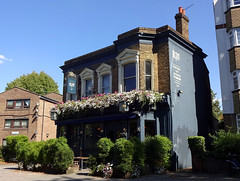 It was acquired by the Capital Pub Company in April 2011 (see older version of this page for a pre-acquisition description), which itself was bought by Greene King later in 2011. The pub then closed for a major refurbishment at the end of September 2011 and opened again in June 2012.

Entry is into a large, bare-boarded space with mismatched tables and chairs, dominated by the L-shaped bar in the centre. There's plenty of natural light here, though this falls off quickly as one proceeds further in past the bar. A passageway leads back past three pairs of high padded back-to-back banquettes to a raised conservatory-style dining area, and finally to a large garden. Decor is standard gastropub shabby-chic, though some extra interest is added by the presumably-original ornate bar back and smoke-blackened brick fireplace in one wall.

Kake visited on a Thursday afternoon in September 2018. There were a few other customers in when I arrived around 1:15pm, spread throughout the interior and exterior space; some of them having lunch, and others apparently conducting a job interview. Music was playing, not too loud.

The handpumps were clipped for Portobello VPA, By The Horns Calypso Carnival, Truman's Swift, and Greene King IPA. A pint of lime and soda was £2.15.

Service was mixed. It was quite a while before anyone came to the bar to serve me, and the staff member who did eventually arrive made no welcome or apology for the wait. However, another member of staff who arrived on duty later was friendly and helpful.

They have free WiFi via The Cloud (which requires registration).

Accessibility: A step to get in. Step-free to bar, some of the seating, and the toilets (including an accessible one) once you're in. The ladies' has a cubicle with a door that opens outwards. Three steps with handrail to the dining area, and more steps from there to at least part of the garden.