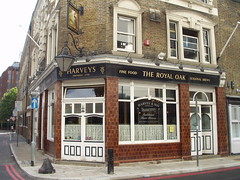 Good Beer Guide pub near Borough Station. Owned by Harvey's, and so normally has the full range of Harveys beer, including the seasonals.

It has two rooms linked by a small lobby at the front door and the bar in between them serving both. Service is very friendly, as are the regulars found propped along the bar. Can get busy in the evenings, but on a Saturday afternoon in October 2008 was very quiet (no music is played either).

Food is served lunchtimes and evenings photo of regular menu as of July 2018. It's very good with interesting specials (though they don't often change).

bob, Martin and others visited in July 2018. The pub was relatively full when bob arrived but there were a couple of spare tables. The pub was busy most of the night. The beer as usual was very good and relatively cheap for London. The scampi and chips(£8.95)photo was as good as ever. Martin had the Steak and Kidney pudding(£11.95)https://www.flickr.com/photos/rjw1/42923074384/in/datetaken/ with chips instead of mash.

Kake tried one of the specials on a Monday evening in June 2008; salmon fishcakes served with chips and salad (£8.50) photo. The fishcakes appeared to be deepfried, and didn't hold together very well, and the accompanying salad had no dressing. The tartare sauce looked and tasted home-made though, and the chips were fine. On visits in September 2008 and March 2009, Ewan had a pie (only partially encased) of the vegetable and stilton variety (just under £8), but it was very tasty nonetheless and served with fresh steamed vegetables which had just the right amount of butter to go down easily photo. Plenty of bowls of chips were also consumed, great value at £2 as you get quite a few of them and they are all perfectly-done chunky fries.

Juliet took Sidney-the-dog there for Mild Month in May 2010, and the staff were very helpful – came out to say hello to her, provided her with a bowl of water, and later told us when a larger table (better for number of humans present and having a corner for Sidney to fall asleep in!) became available. The milds were all lovely, too.

Can be hard to find; make sure you have a map if you've not been there before (Tabard Street is diagonally opposite Borough Station, running behind the prominent church building).