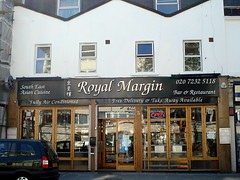 Royal Margin was a Vietnamese restaurant and takeaway near Surrey Quays Station. It closed in early 2013, apparently due to repossession of the property. As of November 2013, the premises are occupied by a Chinese restaurant called Ma Po photo.

Vietnamese restaurant and takeaway near Surrey Quays Station, formerly known as Hue. The interior of the restaurant is quite modern, with seating for at least 50 people, including two large tables with lazy Susans. They also do delivery, and you can order and pay online via Just Eat.

They offer a range of Vietnamese dishes as well as a small selection of Chinese and Thai dishes. Normally this lack of specialisation is a bad thing, but most things Kake, bob, and doop have tried from the Royal Margin so far have been quite competent. The Thai dishes aren't very Thai-like, though.

Sugar cane prawns (minced prawns wrapped around a stick of sugar cane, £4.80) aren't bad at all, while chargrilled pork balls (£5) are good and moist, but could do with a bit more spicing. Vietnamese spring rolls (£3.60, last sampled by Kake, Jan 2010) are a bit greasy, and bear more a than slight resemblance to deep-fried battered sausages. Vietnamese hot and sour soup isn't hot in the slightest, but fairly tasty. Kake would have preferred fewer tomato skins, and fewer bones in the catfish pieces.

Pad Thai (£5.20) is competent, but almost entirely devoid of chilli. We've ordered the braised pork belly (£5) several times, and it's always good — and a welcome change from the usual cuts of meat. Vietnamese steamed crepes (£5) aren't bad at all, but could sometimes do with a bit more seasoning. Steamed rice (£1.50) is fairly average, but egg fried rice (£2.20, last sampled by Kake, Jan 2010) is pretty good; the rice they use is a bit like Thai sticky rice. Yum Jai ("Thai spicy fresh salad", £4.50) is disappointing; chunks of tomato with a few bits of celery and cucumber in an overly sweet sauce. The tofu and crab dish has only a homeopathic quantity of crabmeat (lots of eggwhite though), but at least they don't use surimi (crab sticks). The tofu is good though — large, soft, creamy pieces, deep-fried and then simmered — and it's a fine enough dish if you fancy something mild. The lemon chicken (£5, last sampled by doop, Jan 2010) is a bit too sweet if you eat too much at once, but otherwise very good: crispy and very lemonny.

They do offer pho, in both beef and chicken varieties, and Kake orders it often. The stock is always good, clean-tasting and complex, and the beef is cut thinly and barely cooked. It's packaged fairly sensibly for takeaway, with the soup and garnishes separate from the noodles. I do wish they wouldn't cram so many noodles into the container, though; the portion's too large for the amount of soup, and it just makes them stick together.

As a a change from takeaway, bob visited the restaurant on a Sunday afternoon in May 2008. They were playing rock music quite loudly. There were two other customers as well as several Asians coming in to buy roast duck/pork/chicken to take away (a whole roast duck was priced at £12.90).

I had the Vietnamese spring rolls photo, the beef pho photo, and a lemon and lime smoothie. The pho was very good, and didn't suffer from the complaints Kake has about the takeaway version. The smoothie wasn't smooth, but was certainly made from freshly juiced limes and lemons. Tea was £1.

Comment added by Kake: The Thai fish cakes are better than I thought they'd be - decent amount of lemongrass flavour and a springy texture. I should order these again.