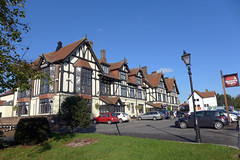 Kat and Rick visited this huge pub on a Monday afternoon in August 2009, during a walk in nearby Epping Forest. We arrived at the end of the lunch rush and all the tables were laid for food. There were a number of noisy families present as it was the school holidays, but we managed to find a small table to ourselves.

There was a handpump for London Pride but it was off when we arrived (with no prospect of it being changed in the near future). On requesting a pint of lime and soda we were told they didn't do pints, only 'regular' size, which turned out to be less than a pint but larger than a standard Coca-cola glass (for £1.50).

There is a large beer garden and an even larger car park. The picnic benches outside seemed more welcoming for people not ordering food, but the piles of uncleared plates left out after lunch meant that we were driven back inside by wasps. The staff seemed friendly but inexperienced (we overheard the girl who served us complaining to her colleague that she couldn't be expected to know the difference between white wine and rosé).

We felt very uncomfortable during our brief visit — for a pub marked on the Ordnance Survey map on a major walking route it is not a very welcoming place for walkers who just want a quick drink to keep them going. The bits of wood glued to the walls for a 'log cabin' effect were quite amusing though.