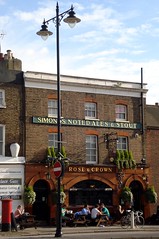 Pub in Clapham. It's fairly small and cosy inside, with large pillars marking off a tucked away seating section along the wall opposite the bar.

Kake and Ben visited on a Wednesday early evening in May 2009. The picnic benches outside were full of people enjoying the sunshine, and there were a fair few customers inside too; we managed to find a table in the corner though.

According to the 2009 Good Beer Guide, there's a heated and part-covered yard at the back for smokers.

According to the local CAMRA guide "The Clapham Omnibus" (surveys undertaken in October-December 2008), food is served 6pm-10pm Mon-Fri and 1pm-10pm Sat-Sun.