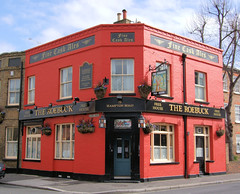 Lunch served weekdays, according to the 2008 Good Beer Guide.

According to an advert in the August/September 2010 edition of the London Drinker magazine, they have a "small award winning walled garden [with] a summer house and a new gazebo for smokers" as well as four ensuite bed and breakfast rooms.

Opening hours taken from advert in the August/September 2010 edition of London Drinker.