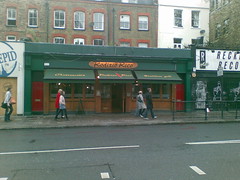 Brazilian buffet on Upper Street in Islington, part of a small chain with another branch in the O2 Arena. This branch is quite large.

bob, Dean and Richard visited in April 2008 and had the prime meats BBQ buffet (£20.50). This consisted of the meat they bring you on skewers and a hot and cold buffet. The buffet stuff was pretty good, and based on going twice in the same month had a fair amount of dish rotation between visits. The meat was okay, but no truly great bits of meat, although the chicken hearts were the best bob has had. They also do one with seafood, and (according to Time Out) a vegetarian one.

They have cocktails, beers and wines. You can only buy cocktails by the glass except for jugs of sangria.

Dean says that the desserts are expensive and aren't worth it.