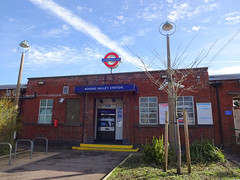 Zone 4 Tube station on the Hainault Loop of the Central Line.

Roding Valley is the least-used station on the entire Tube network; the TfL entry and exit figures put its annual usage for 2012 at only 220,000 entries/exits (as comparison, King's Cross St Pancras, Oxford Circus, Victoria, and Waterloo each had over 80 million entries and exits in the same year).