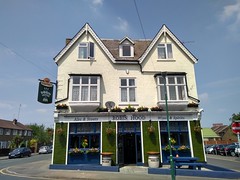 It was refurbished in Autumn 2017, with the previous traditional decor being swept away in favour of a rather more identikit, corporate look. Entry is into a carpeted section with a mix of sofas and high chairs/tables, in a light and dark grey colour scheme. Generic art prints hang on the walls alongside displays of various trophies and a board with the names of past officers of the Robin Hood cribbage team. A dart board sits in a small area separated off with a floor-to-ceiling wooden room divider.

Further back is a lighter, brighter area with wooden plank-style walls painted in a grey and white "distressed" effect, a similarly "distressed" wooden floor, sturdy wood-topped tables, and deliberately mismatched chairs. The vintage photos of Sutton which previously adorned the walls have been replaced by yet more generic art prints, though one photo of Sutton Station in 1976 still remains, stuck in a corner next to some rather unrealistic "fake books" moulding.

There's a patio-style beer garden out the back, and a function room on the first floor; thankfully, the abovementioned vintage photos can now be found along the stairway up to the latter.

Kake first visited on a Tuesday lunchtime in August 2017, pre-refurb. There were no other customers when I arrived a little after their opening time of noon, but one turned up while I was there, apparently a regular. Music was playing, not too loud. Service was friendly and welcoming. Despite the eight handpumps, only two ales were available: Young's Bitter (£1.80/half) and Young's Special. The former of these was a little past its best, though not enough to justify taking it back to the bar.

Kake visited again post-refurb, on a Thursday lunchtime in May 2018. There were about a dozen other customers when I arrived around 1pm, some of them having lunch. Music was playing in the front section, quietly enough that it wasn't audible in the back. Service was again friendly and welcoming. The six handpumps were clipped for Young's Bitter and Special only. A pint of lime and soda was £1.50.

According to the Robin Hood website as of May 2018, food is served noon-2pm and 6pm-9pm Mon-Sat, and noon-4pm Sun (see below for photos of menu).

In August 2017, Kake tried the vegetarian chilli (£7.25) photo, made with quorn mince and served with rice. It was a fairly standard pub chilli, but a pretty good example of such — there was a good balance of quorn to kidney beans, the sourness of the tomatoes was well-controlled, and there was a nice hint of chilli heat. (Sadly, as of May 2018 this appears to no longer be on the menu.)

Child-friendliness: According to a sign seen in May 2018, "well behaved" children are welcome until 8pm. There are nappy change facilities in the accessible toilet. They have a small children's menu (see below for photo).

Dog-friendliness: According to a sign seen in May 2018, dogs must be kept on the lead.

Accessibility: No steps to get in, or to the toilets, including an accessible one. A couple of steps to the beer garden.