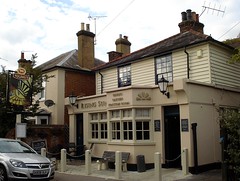 Entry is into a fairly traditional and cosy bar area, with more seating and a restaurant area further back. There's a large garden beyond this, with a barbecue/rotisserie station and covered patio at the end near the pub, and a neatly-manicured grass-and-flowers area further back. A couple more seats are available out the front of the pub, on a tiny patio facing the street.

There were about a dozen people in (including three or four children) when I arrived a little after 5pm, most of them in the garden. The garden filled up rapidly during my visit, to the point where people were perching on the walls of the raised beds by 6:15pm, though this may partly have been because a large (pre-booked?) group had colonised the patio.

As of August 2012, food is served noon-3pm and 6pm-9:30pm Mon-Thu; noon-3pm and 6pm-10pm Fri-Sat; and noon-8pm Sun. According to the 2013 Good Beer Guide, the food is made with locally sourced ingredients and the pub even has its own curing and smoking room. The menus are certainly more imaginative than your standard pub food: see photos of starter menu, main menu, specials menu, and dessert menu.

Kake tried one of the specials in August 2012: grilled sea trout fillet on gnocchi with capers, artichokes, baby spinach, cherry tomatoes, and green olive tapenade (£14) photo. It was really good; a well-designed and well-executed dish. The fish was cooked almost exactly right — my only minor criticism would be that I'd have preferred the skin to be crispier. The gnocchi were substantial without being over-heavy, and the slightly-pickled artichoke hearts lent a good tang to the dish, while the (unadvertised) thinly-sliced red chillies gave a touch of heat. It wasn't cheap, but I thought it was well worth the price.

Kake's verdict: Not worth going out of your way for the beer, which is a little disappointing given it's in the Good Beer Guide. But I'd happily come back for the food; and for a food-led pub, the ale selection is better than one might expect.

Accessibility: No steps to get in, and step-free through to the bar, interior seating, and accessible toilet (which has a note saying the key's available behind the bar; probably a RADAR lock but we didn't check this). The ladies' is up a flight of stairs with a sturdy non-continuous handrail on one side. One or two steps to the garden.