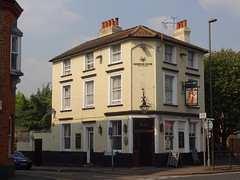 Greene King pub in Epsom, in the Good Beer Guide.

The interior consists of a single small bare-boarded room with checkerboard tiling around the corner bar photo. A fireplace is set into a wall of exposed brickwork to one side of the bar, and opposite this is seating for 15 or 16 people at well-varnished tables and chairs on either side of a wood-and-glass room divider. A dozen tall stools cluster around small round high tables between the bar and the front windows. There's a part-covered grass-and-decking beer garden out the back.

Kake visited on a Thursday afternoon in September 2016. There were two other customers inside when I arrived around 2pm, and a few more in the beer garden. '90s indie music was playing, not too loud. Service was friendly.

Five of the six handpumps were on, clipped for Greene King The Rifleman (1.85/half), Greene King London Glory, Hogs Back Surrey Nirvana, Windsor & Eton Eton Boatman, and Westons Wyld Wood.

According to their website as of September 2016, food is served noon-9pm Mon-Sat and noon-3pm Sun, and consists of steaks, burgers, and focaccias.

According to a sign seen in September 2016, there's a quiz on the first Wednesday of each month.

Kake's verdict: Perhaps not worth coming to Epsom for, but certainly worth popping into if you're in Epsom.

Child-friendliness: According to the 2017 Good Beer Guide, children are welcome until 6pm. They have a small children's menu consisting of things with chips (nothing vegetarian).

Accessibility: A thick ridge at the threshold, around an inch in height. Step-free to the toilets, but access is a little narrow. Steps to the beer garden.