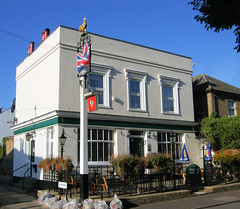 It saw a change of management in early 2011, another in April 2012, and yet another in mid-2019. As of August 2019 it's run by Twickenham Fine Ales. The visit described below took place under the management regime of 2011-2012, and hence some comments may be out of date.