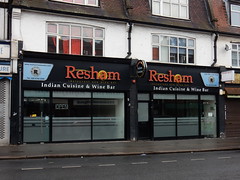 Resham was an Indian restaurant in Norbury, specialising in Indian-style Chinese food. According to its website it closed in May 2019 due to retirement.

It's quite large, spread across two shopfronts and seating around a hundred people in total. The interior is quite plain, with little in the way of decoration photo.

bob visited on a Wednesday evening in February 2017. There were three sets of diners in already when I arrived around 7:30pm, two of them in quite large groups, and two more parties arrived while I was there. TVs were showing football with the sound on relatively quietly.

I ordered chicken 65, lamb bhuna, hakka noodles, and keema naan, and was asked if I wanted everything together or my chicken 65 as a starter. I also had a bottle of still water, which came with a glass containing a very tired lemon slice photo. They brought condiments photo without me having to ask, including a green chilli chutney that had quite a kick.

Chicken 65 (£6.25) photo was quite different from the usual chicken 65, being a Chinesified version consisting of strips of chicken in a gloopy orange sauce. It did taste of garlic though. Lamb bhuna (£8) photo had tender lamb, and the sauce was fine.

Hakka noodles (£6) photo were competently cooked, with quite a bit of garlic, though possibly a touch too greasy. Keema naan (£3.45) photo was stuffed with tasty spicy meat, with no red dye in evidence.

Accessibility: No step to get in, and it's level to the toilets once you're in.