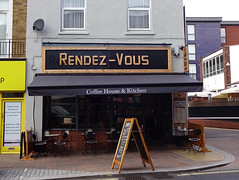 It's quite small, seating just 20 people at free-standing dark-wood-effect melamine-topped tables surrounded by upright padded chairs. The floor is utilitarian tiles, in a cream colour echoed on the walls. The overall feel is casual, but a few steps up from a greasy spoon.

The menu includes breakfasts, sandwiches, panini, ciabattas, jacket potatoes, pasta dishes, salads, and dishes such as falafel and halloumi burgers, lasagne, and fish and chips. They also do smoothies and freshly-squeezed juices, and have soya milk for hot drinks.

Kake visited on a Friday lunchtime in January 2016. There were four or five other customers in when I arrived around 12:30pm, and several others arrived for takeaway while I was there. Music was playing on the radio (Magic), not too loud.

It wasn't entirely clear whether to order at the counter or at the table — I thought the staff member I asked said she'd come to the table, but she didn't, so I might have misheard her or it might have been because she was busy dealing with several takeaway customers who'd come in just after me.

I went for one of the daily specials — smoked salmon, scrambled eggs, and avocado on toast (£6.30) photo, plus a cup of tea (£1.40). Although I asked for the tea to be "very weak", it came strong and with the bag still in; however, they replaced it straight away when I pointed this out.

The eggs weren't exactly creamy, but they weren't dry or rubbery either. The avocado was fridge-cold, but nicely ripe and not mushy. Unfortunately there was a bit of plastic wrapper left in amongst the salmon. The toast was fine though.

Service was friendly, and the food came quickly.

Accessibility: A step to get in. No steps to the toilet once you're in, but access is narrow and involves corners.