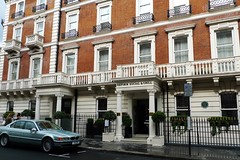 The large dining room is designed to feel like a 'gentleman's club' (presumably in homage to the Reform Club frequented by Phileas Fogg). The tables, chairs and cutlery do give the feel of being stuck in the early 20th century, but the service is polite and relatively laid-back. Unfortunately the place was completely empty when we arrived, so we felt a little awkward sat in the middle of a sea of empty tables.

Kat visited early on a Friday lunchtime in October 2012 with several colleagues. We were planning to take advantage of a 'lunch box selection' offer, and just as well really as this was the only menu given to us. The 'box' is in fact a large chopping board with a slate inlay, with a choices of meat, fish/seafood (both £15) or vegetables (£12). There are however separate breakfast and dinner menus, plus a brunch menu on Sundays.

We were offered bread (white, brown or rosemary) from a basket after ordering, but sadly Kat's piece was rather stale. Thankfully the food turned up reasonably quickly. Everyone went for the meat option: this comprised a black pudding scotch duck's egg (very tasty, slightly runny yolk), deep fried bacon strips (bitesize, nicely salty, coated in breadcrumbs), several slices of hanger steak (cooked correctly to order, plentiful but not massively exciting) with a garnish of fried snails (hurray!), and a paper cone of huge chips (filling but disappointingly unfluffy and lukewarm). There was also a pot of pink jelly which I wasn't sure what to do with, as it was too structurally sound for spreading or dipping (it didn't really taste of anything anyway, so I just left it).

Kat's verdict: elements of the meal were good enough that I'd come back to try something from the a la carte, but it's probably a bit too pricey compared to other, more lively carnivore destinations in the area. The cocktail list also looks interesting.