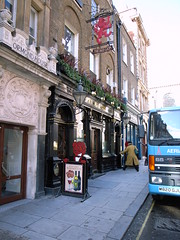 Pub near Piccadilly Circus, notable for its mirrors. It's on CAMRA's national inventory of historically-interesting pub interiors.

Previously a Nicholson's pub, it was acquired by Fuller's some time around the start of 2009.

As of April 2008, food was served noon-4pm and 5:30pm-9:30pm Monday to Wednesday, and noon-6pm Thursday to Saturday. This may have changed following the Fuller's takeover.