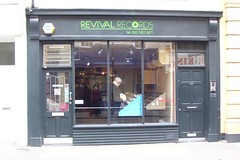 A second-hand record shop on Berwick Street in Soho, which was renamed Revival Records in 2007. As of mid-2010, it has returned to its original name.

There's a good range of vinyl across genres (including reggae, lots of dance and hip-hop, as well as pop, rock and indie, and plenty of 7" singles, held in boxes behind the counter). There are also racks of CDs (displayed without cases, only inlay cards), as well as cut-price CDs and display cases of rarities. Prices are very competitive for the area.

They also have a small collection of DVDs.

There are no turntables for listening to vinyl prior to purchasing, but they do have CD players.